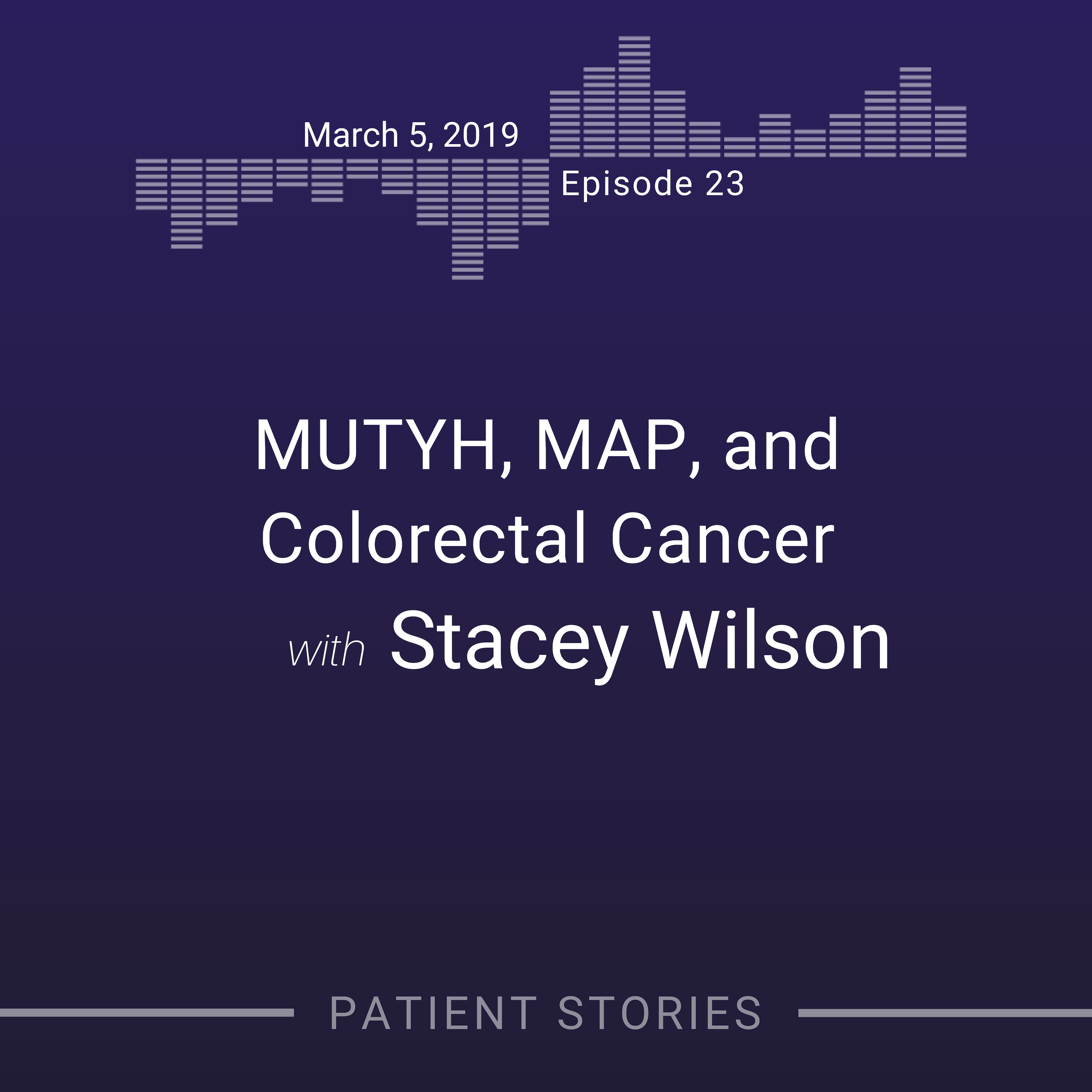 At just 35 years of age, Stacey Wilson was diagnosed with Stage III Colorectal Cancer. Nine months later, with surgery and chemotherapy behind her, Stacey met with a genetic counselor, had hereditary cancer testing done, and received an explanation for why she was diagnosed with colorectal cancer at such a young age, and with no family history of colorectal cancer: She had a genetic diagnosis of MAP (MUTYH-Associated Polyposis), an autosomal recessive hereditary cancer syndrome caused by mutations in both copies of the MUTYH gene. Stacey is passionate about raising awareness for Colorectal Cancer, the possibility of preventing colorectal cancer in many cases through screening colonoscopies, and the benefits of genetic testing for those diagnosed at a young age or with a significant family history of colorectal cancer. She also shares why she has mixed feelings about 23andMe’s MUTYH testing and direct-to-consumer genetic testing in general.

Grey Genetics News Corner blog post What Can 23andme tell you about your colorectal cancer risk?

What is MAP? @ 2:05
Stacey’s diagnosis of colorectal cancer at age 35 @ 3:00
The wonders of Nurse Navigators and deciding on the right course of treatment @ 5:40
Referral to genetic counseling discussion of possible results @ 8:26
Disclosure of genetic testing results and Stacey’s follow-up with doctors @ 11:40
From MD Anderson and back to Indy: Stacey’s continued screenings–and incidental findings @ 13:25
Variable polyp burden with MAP and dealing with limited information @ 17:26
How common is MAP really? @ 22:00
Stacey’s response to individuals who hesitate to have a colonoscopy done @ 23:43
Implications of Stacey’s MAP diagnosis for her children and navigating testing for her husband @ 26:03
Stacey’s mixed feelings about 23andMe adding the two common MUTYH variants to their health report–and at-home genetic testing in general @ 29:37
Stacey’s change in perspective about family history and cancer risk @ 32:27
Stacey’s advice to someone diagnosed with colorectal cancer <50yo and how to think about your family history of colorectal cancer @ 36:21
The importance of being your own advocate and seeking out second opinions @ 38:08
Colon Cancer Awareness! @ 41:50